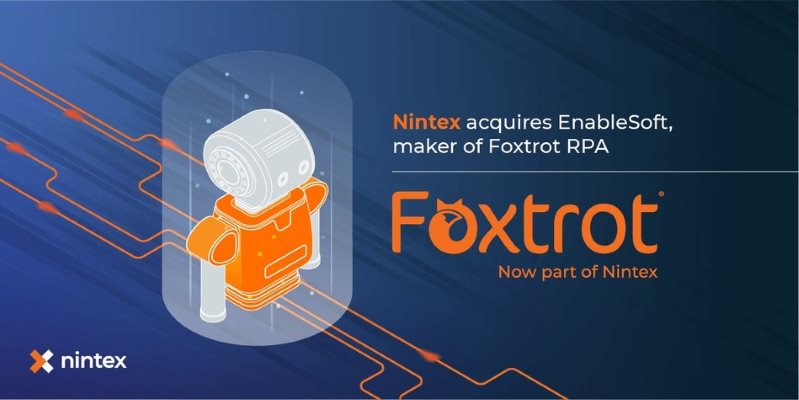 
On March 4, Nintex announced that it has finalized acquisition of the EnableSoft company. The company behind the Foxtrot suite. Starting then RPA (Roboting Process Automation) software became part of Nintex products, somehow completing the gap between business processes in the cloud and those being done on users’ computers “locally”.

Basically RPA (what stands for Robotic Process Automation) is software technology that allows for the automation of various computer tasks or computer-based business processes. RPA is a broad term for process automation or workflow automation technology, used to streamline both complex and simple processes that are typically done by a human on a computer. Automation is achieved by deploying software “bots” that have been trained on the exact mouse-motions, keystrokes, and rule-based logic underlying a given task. Simply, this software helps companies to automize those repeatable tasks that looks the same every time – like putting data from SAP to Excel, copying data from emails to SAP (like when email initializes a process), moving files across file storages and so on. Those tasks usually do not require any sophisticated knowledge and can be done not exclusively by a skilled workforce, but by anyone. RPA does those repeatable job for us, letting us to focus on more unique tasks.

EnableSoft created a product that can really do a lot. It has hundreds of built-in actions:

It is designed to deeply work with such applications as: Internet Explorer, SAP, Acrobat, Outlook, Office (Word, Excel). It also allows to manage computer, use DOS/ PowerShell scripts, connect to FTP, call REST endpoint and then if something is not defined as an action, user can use the bullseye to target application and then select how Foxtrot should interact with it, e.g. there is no built-in command to print a document, however creating a sequence simulating that user is clicking on the print icon and then hits the “Print” button is a solution as well:

Foxtrot is a suite that contains 4 applications. Foxtrot, FoxBot, FoxHub and Foxtrot Administration.

This is a process designer. It is designed to allow authors to create processes, define steps and actions, built the logic. Foxtrot also allows to execute those processes to test if they are working properly. It’s interface is built from the following sections:

Once the process is saved it can be then distributed to multiple machines. Each machine – the “bot” should have this application installed. Then the process can be opened and executed. FoxBot cannot make any changes to the process. It is just a user, that runs the defined flow.

FoxBot’s interface looks nearly the same as Foxtrot’s – it is a simplified version, with no left columns containing actions, library and bullseye. Just the execution.

FoxHub is the central place to orchestrate the defined automation jobs. It allows to see all of bots and delivers information about their status and what they are doing at all times. It allows to manage individual bots by adding it a job, or by adding a team job for multiple bots to complete. FoxHub runs jobs in an orderly fashion through a job queue.

The work is sent out to the FoxBots which reside on their own virtual or physical machine. When creating a new job user must pick which bots will participate in it. Jobs involving data can be assigned to a single bot, or can be set up as a team job allowing multiple bots to join in. If this is a team job, FoxHub is in charge of managing the data and distribution of tasks to the next available bot. Once the project is complete, FoxHub starts assigning work for the next job in the queue.

This is the application designed for managing licenses, user accounts and other global settings for all Foxtrot suite applications.

The model for Foxtrot processes (or workflows) is aligned to Nintex Workflow. However licensing for Workflows does not include licensing for Botflows. Therefore if you would like to have a solution using both Nintex Workflows and Botflows you need to buy subscriptions for two products separately. The volume-based pricing and enterprise-wide pricing today are the same for whenever you want to buy either of the product. So for the volume-based you can choose between the following amounts:

For the enterprise-wide (related to the number of employees company employees) it looks as below:

This is always a yearly commitment. All fees are paid per annum. If you would like to find out more about prices, don’t hesitate and contact me directly.

The solution I created was is a proof of concept for a more efficient handling of a conference registration and check-in process. It was inspired by a recent conference I had co-organizing. Process is divided into two parts. First, the bulk registration of attendees from a specific company, and then the process of check-in at the venue.

The first process goes this way:

This process is totally covered by the Foxtrot and other apps installed on the machine. This is how it is done in Foxtrot:

This is how it works live:

The second process is “installed” at the venue location. Imagine there is a kiosk device, with a QR code scanner and a printer. Attendee reaches out a kiosk, shows the QR code received after registration, and:

This is how the second part works live:

When I first read about Foxtrot I was thinking how Nintex is going to combine it with its existing apps, but it turned out that this integration somehow already exists – via Component Workflows on the one side and HTTP calls on the Foxtrot side. This way Foxtrot can also be integrated with Microsoft Flow or other cloud-based solutions.

Another thing I liked is the adoption. The tool is intuitive, moreover for someone who works with Flow/ Nintex or other process designer tools this is a very short learning path. Couple of hours to get familiar with even advanced techniques.

However I also found that it has its issues. One of the most irritating is that the bullseye functionality gets totally lost on devices such as Surface Book, having ultraHD resolution and scale set to different value than 100%. To create a properly working solution I had to change layout to fullHD and scale to 100%.

Another thing is the web browsers support. Currently it works only with Internet Explorer, support for Chrome engine is on its way. It is said to be available this year.

Also it has issues with MFA authentication when creating connections to Office 365 based apps. In my case even using app passwords didn’t work for Exchange. Maybe I did something wrong 😊

I haven’t also found any way to automatically trigger a Bot if a specific condition is met. But here also – maybe I wasn’t searching deep enough.

Nevertheless this tool has really great possibilities. It really fills the gap in integration between systems that e.g. don’t have API available, or it’s configuration is very much time consuming. Then this is possible to simply set up a bot working on virtual machine, that can be called to get and return data from a specific 3rd party app.

Foxtrot can also be used for testing purposes – you can create user tests, to follow defined scenarios for clicking app interface and checking outcomes.

If you would like to learn more about the Foxtrot contact me. I can help you with the app adoption and implementation in your business.